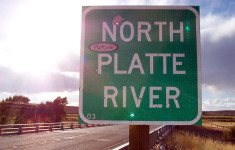 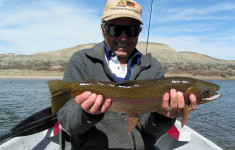 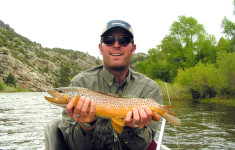 At the foot of the Snowy Range Mountains flows a hidden gem through the Wyoming plains, the North Platte River. This pristine freestone river, nestled in the Saratoga Valley, offers a rare combination of Blue Ribbon trout fishing, spectacular views, abundant wildlife, and no crowds. This freestone fishery begins in North Park Colorado at the confluence of Grizzly and Little Grizzly Creek and flows north into Wyoming picking up several other small streams along the way. The North Platte continues north through Wyoming over 300 miles before it heads east and reaches the Nebraska border. On its travels the characteristics of the river change dramatically from a deep canyons with tight narrow runs to wide meandering flats in the lower pasture and high desert sections. The 60 miles between the Routt access and the town of Saratoga is all considered a Blue Ribbon trout fishery and has not been stocked since 1979. In 1982 the Wyoming Game & Fish Department instituted a slot limit, which requires all fish between 10-16 inches to be released immediately. They also designated this a flies and lures only stretch. The combination of these conservation regulations drastically increased the number of trout per mile. The North Platte now claims 4000 fish per mile consisting mainly of browns and rainbows, with a few Snake River cutthroats. The North Platte River offers a multitude of wade fishing and float fishing opportunities. There are over 20 miles of public water in the Medicine Bow/Routt National Forest alone, with several other significant public sections between Colorado and Saratoga.

Route is just south of the Wyoming/Colorado boarder and is the beginning of the Medicine Bow/Routt National Forest access. This access does have a boat ramp with rails that go down to the river to unload rafts, but you cannot back a vehicle down this particular ramp. Hard McKenzie style drift boats are not suggested on this highly technical stretch because of the class 4 and 5 white water in North Gate Canyon, as well as large boulders that are hard to avoid at certain water levels. An experienced oarsman is a must because this particular float from Routt to the next access, Six Mile Gap, is hard to navigate and has flipped many a raft. Most of this section is contained within a canyon with very limited access points, so once you put on you are in it for the long haul to Six Mile Gap, which is 9.8 river miles. The best flows to float North Gate Canyon is between 1000 and 3000 cfs. The wade fishing at Routt can be tremendous and is rarely crowded, but remember that you are in Colorado and you must purchase a Colorado fishing license. The closest place to pick up a Colorado license is in Walden, which has several licenses selling agents.

Six Mile Gap is the first access point on the North Platte in Wyoming. The parking lot and improved campsites are located on a hill a couple hundred yards above the river making it a bit of a trek to get to the fish. There is no boat ramp at Six Mile Gap so you must drag or carry any boats down the trail to the river, as well as up the trail if you take out here. Once you get to the river, however, there is a trail that skirts the North Platte allowing you access to 20 miles of wade fishing and camping (hint, the farther you walk from Six Mile Gap the fewer fishermen you will see). The water is characterized by pocket water, boulder gardens, and long riffles and runs. This access is located in the Platte River Wilderness Area, which is contained within the Medicine Bow/Routt National Forest, so no mechanical use of transportation is allowed, including four wheelers and bicycles.

Pickaroon, the last access located within the Medicine Bow/Routt National Forest, has a primitive dirt boat ramp and unimproved campsites along the river. The one draw back to this access is the 27 miles of dirt road you have to take to get to it, but it’s worth the drive. Pickaroon is not a great place to use as a boat launch or take out because of the long shuttles involved. This is, however, a great place to spend a couple of days wade fishing because of the amount of fishing available and the long drive in. The water is mainly pocket water and long slow moving slicks that can be great dry fly fishing. Douglas Creek, which contains browns and brookies, also dumps into the North Platte here allowing you another piece of water to fish. Pickaroon is one of the most scenic spots on the river and has an abundance of wildlife, including moose, elk, and big horn sheep.

Bennett Peak is a BLM access on the North Platte River with improved campsites and a cement boat ramp and is one of the favorite launch sites for summer floaters. The drive in is 19 miles of dirt road and will take you about a half hour once you turn off Wyoming State Highway 230. There are over two miles of public water to wade fish at Bennett Peak. Below here, however, there is no public water until you reach Treasure Island 12 miles down stream. This is also the point where the North Platte starts to change from a narrow pocket water river, with steep canyons and pine trees, to a braided cottonwood lined river flowing through pasturelands. One thing to keep in mind is that if you are going to take out at Treasure Island you must stay to the left, or west channel as you come into the island. If you go down the right channel you will have to float all the way to Saratoga, another 11.9 miles.

Treasure Island is the last public access before you reach Saratoga. The island itself is over two miles long and has public water on both sides of it allowing for plenty of wade fishing access. If the water is too high to wade to the island there is footbridge over the west channel that will allow you to access it. The water is mostly flat deep runs with a few riffles and undercut banks making it a great dry fly section. Unlike the above-mentioned accesses, Treasure Island is only minutes off of Wyoming State Highway 130 south of Saratoga, making it perfect spot for short day trips. There is a dirt boat ramp and overnight camping is allowed. The next take out after Treasure Island is the town of Saratoga, which is 11.8 miles.

Float times on the Upper North Platte River do change depending on river flows. For instance, a twelve mile float can take any where from 2 hours to 8+ hours.